I have been in the beginning stages of planning a cross country trip on Sarge (Triumph Tiger XCX) and this led to conversations with hubster about how many miles a biker can reasonably ride in a day and be able to do it all over again the next day.  From southeast Alabama to San Antonio is a trip I have made in a day several times by car.  That stretch of I10 and I are well acquainted with it’s Emerald Coast, battleship, casinos, and swamps. 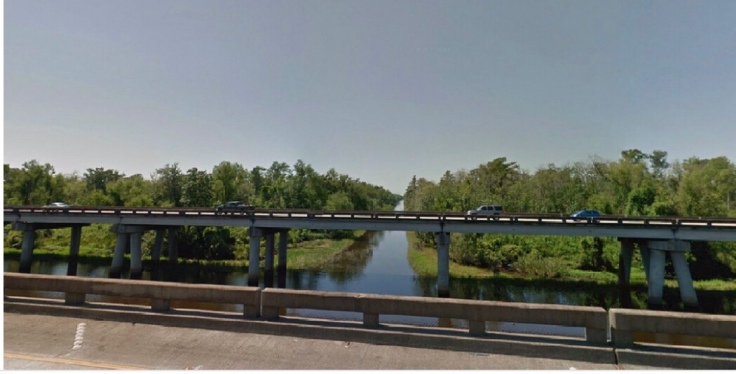 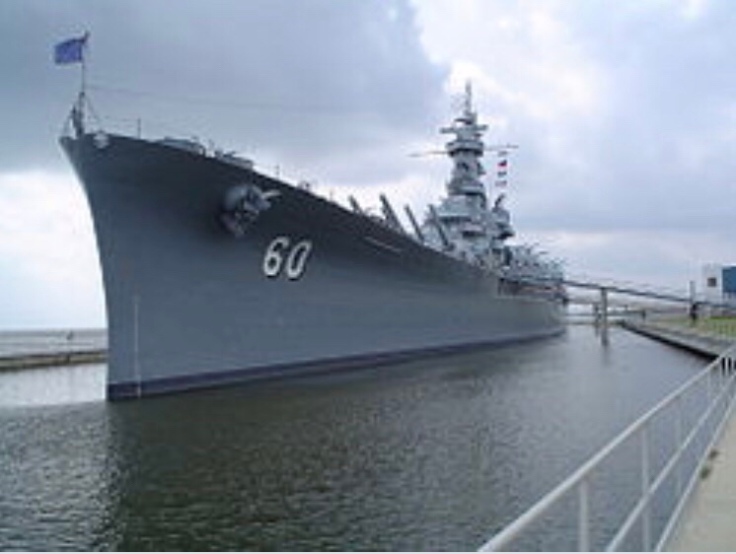 I wanted to ride from home to San Anton’ in one trip.  The hubster had doubts about my ability to pick up and ride the next day should I attempt it.  So I did what any good stubborn southern woman would do, I argued and decided to put my theory to the test. We were planning a trip up to Ohio to visit my daughter in college and see some of our biker pals and I figured this trip would be a great little test run.  We’d haul Sarge up on the back of the truck and I’d ride Sarge all the way back with hubster close by with the truck should my stubborn energy fail.  We took off from Columbus, Ohio early morning for our return trip and made plans to take a few fun detours. 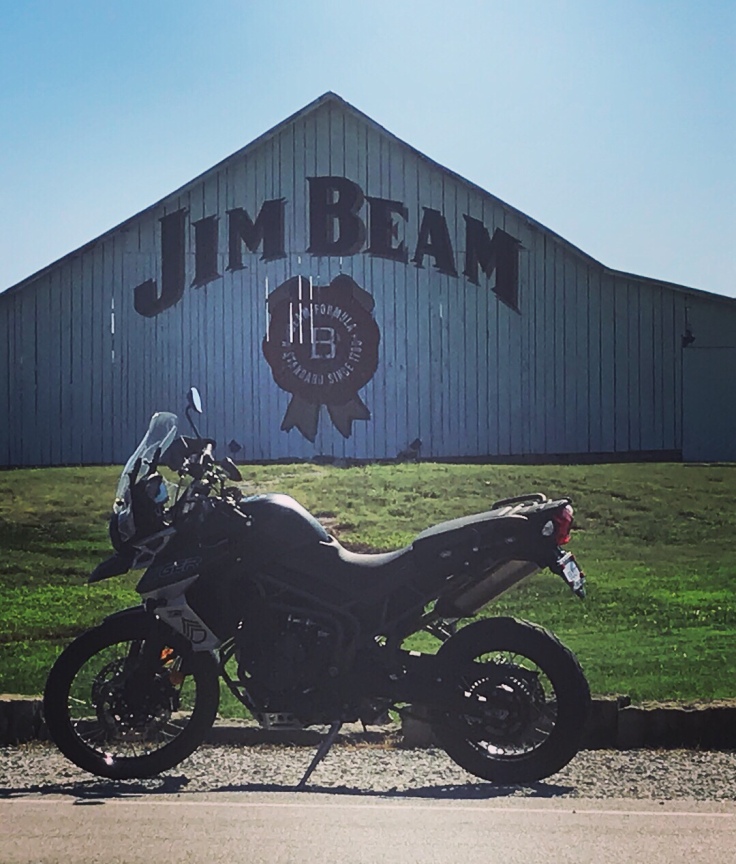 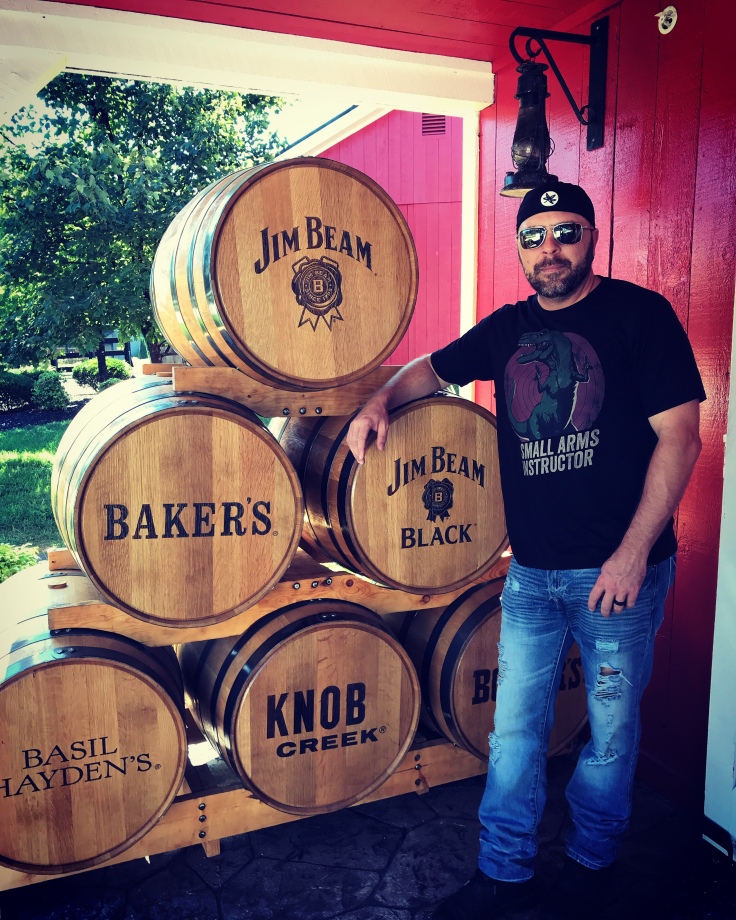 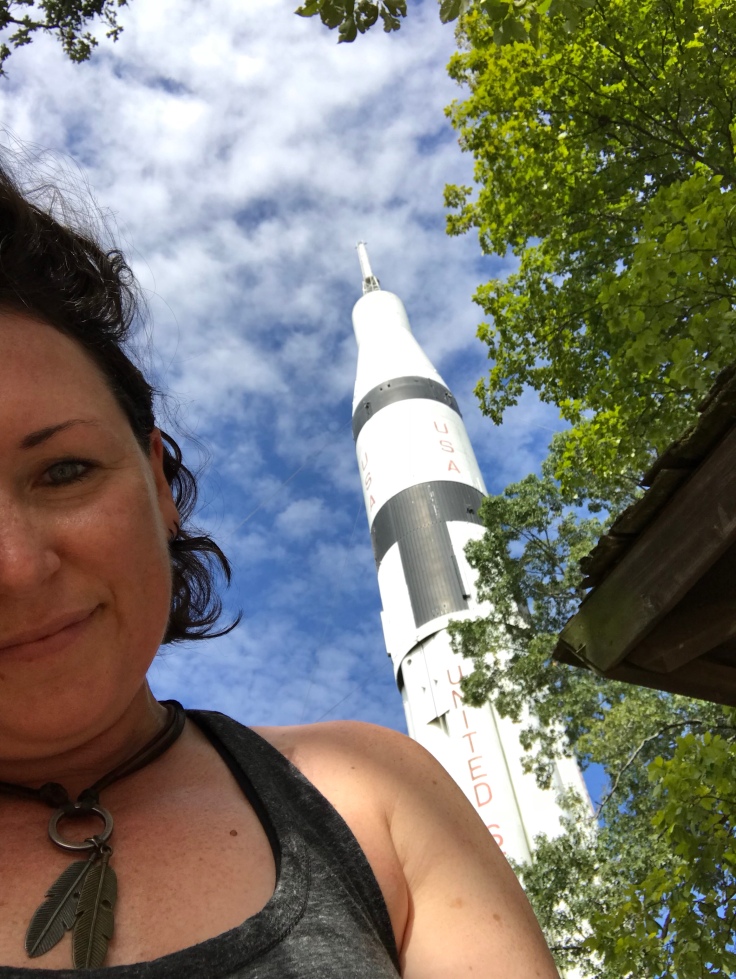 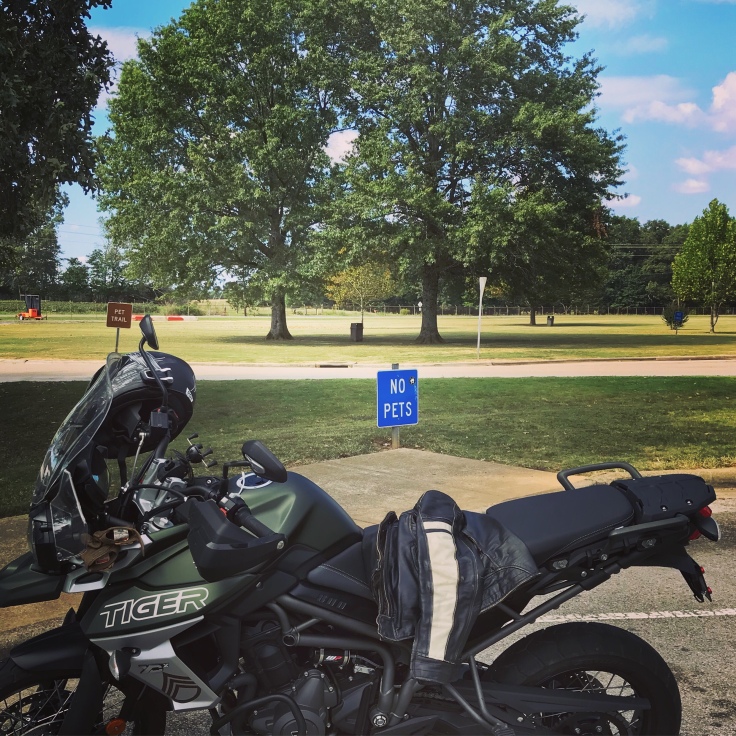 I learned a few things on this all day motorcycle ride like how I don’t care for straight interstate travel that long, how great the stock seat on the Triumph Tiger really is, and how much I love cruise control on a bike.  I learned the importance of taking breaks and stretching.  I also learned that everyone texts and drives now so that’s kinda scary.  All in all it was shaping up to be a good day until I received some not so great news from home.  This is where my story is going to take a turn from bikes to another subject near and dear to my heart and that is the subject of our beloved furry family members. 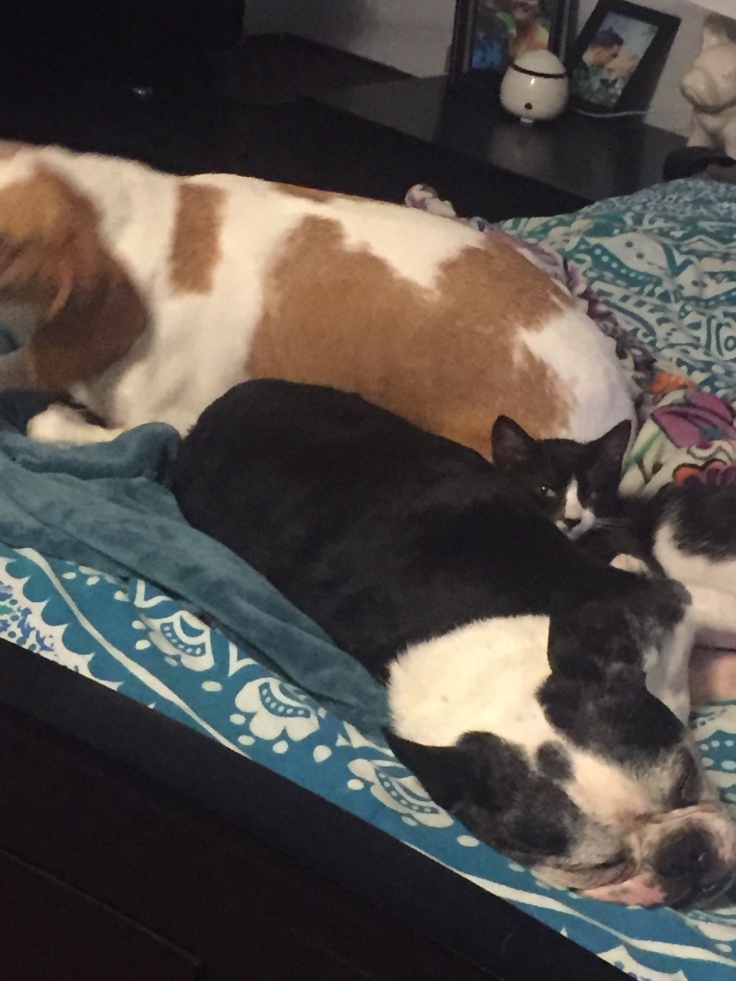 About 11 years ago our family was returning from an overseas duty station and we decided we would find a four legged buddy for our daughter and that is when we met Tito.  We decided on a Boston terrier b/c I love their tenacity of spirit.  I has one as a child and I though this would be a great friend for our girl.  To say Tito is loved by my daughter is an understatement.  From day one Tito proved he was a tank.  Tito hiked his leg to pee on hubster once (only once), Tito picked fights with dobermans and German shepherds, Tito was Napoleon.  Tito was also the most loyal friend my daughter had through her formative years.  He comforted her when she cried, he became excited when she entered the room.  He made it clear to her first boyfriend that he was her pal and didn’t intend on being replaced.  He didn’t do much in the ways of tricks or good behavior but the companionship he provided our girl has been invaluable.  Tito grieved her first year away for college. 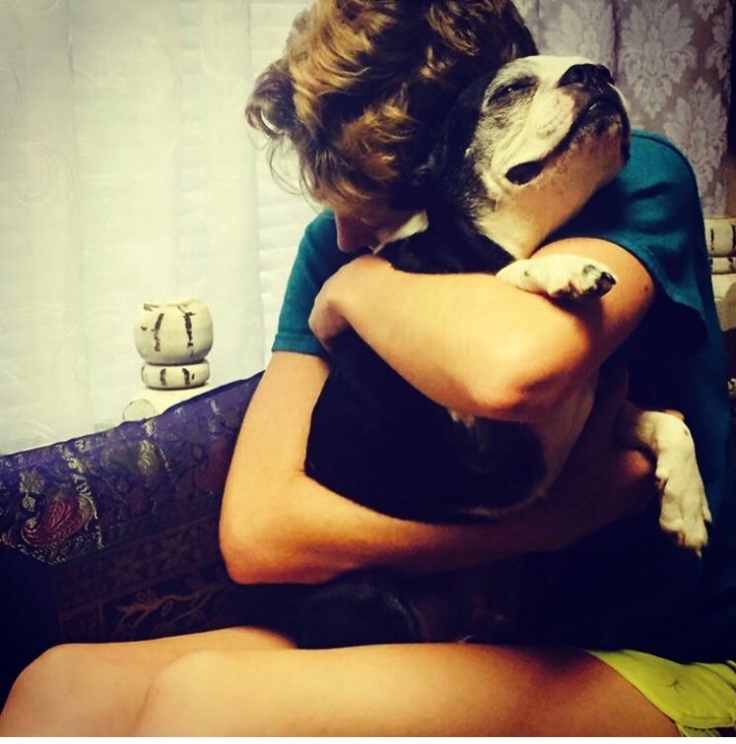 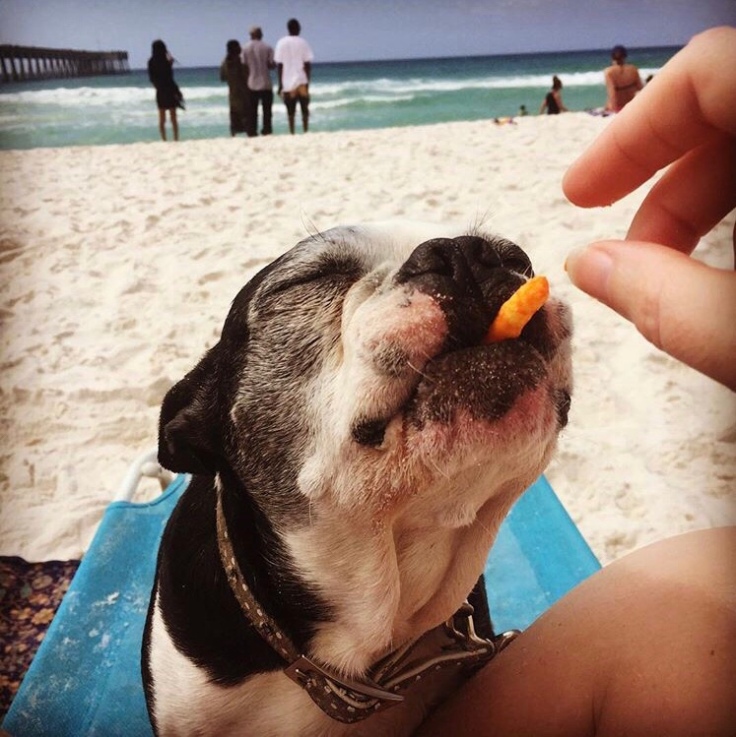 We considered taking Tito with us on the trip to visit our girl but decided against it.  We chose instead to leave him home for our teenage son and other family to look after until our return.  This turned out to be a mistake.  On my ride home I got a call & using my Pack Talk I was able to answer.  I received the news from family that Tito went missing.  I was flooded with worry.  This half blind, half deaf dog was the one family member my daughter makes it a point to call and check on.  We sent her a life size cardboard cutout of Tito’s photo her first year in the dorms.  How was I going to tell her he was missing?When we arrived home late that night I was tired and wet from the rain and I stayed on the bike to do loops around the neighborhood looking for our beloved furry pal.  The next morning I crawled through swamps to find him, hubster crawled through brush and went down roads, we knocked on doors.  No sign of Tito.  We looked, we grieved, we decided that he was old and that he’d never left home before, maybe he meant to go.  Maybe Tito leaving was his way of saying goodbye.  We gave it a week of searches and questioning neighbors and then we decided that we must tell our daughter that Tito was gone.

This pivotal moment is when we considered that we didn’t want our daughter resenting our son for perceived negligence and we didn’t want her wondering and grieving about what ill fated end Tito faced.  We decided to lie.  Now as lies go you are never really done with just one lie, they must be layered and intricately webbed in order for the narrative to fit.  We told her he was old and that we woke to find that he’d passed away peacefully in his sleep.  I felt guilty when I said it, but I reconciled that it must be done.  I later had dreams about Tito being lost in the woods suffering, and that haunted me.  Lies can often bring such stress.  Tito had been with us for so long.  Tito had been attacked by a coyote only a year earlier and had survived and now our negligence led to his demise.  Our daughter must never know.  We extended the layers of lies to family and friends to ensure our girl wouldn’t find out.  It would become our dark family secret. 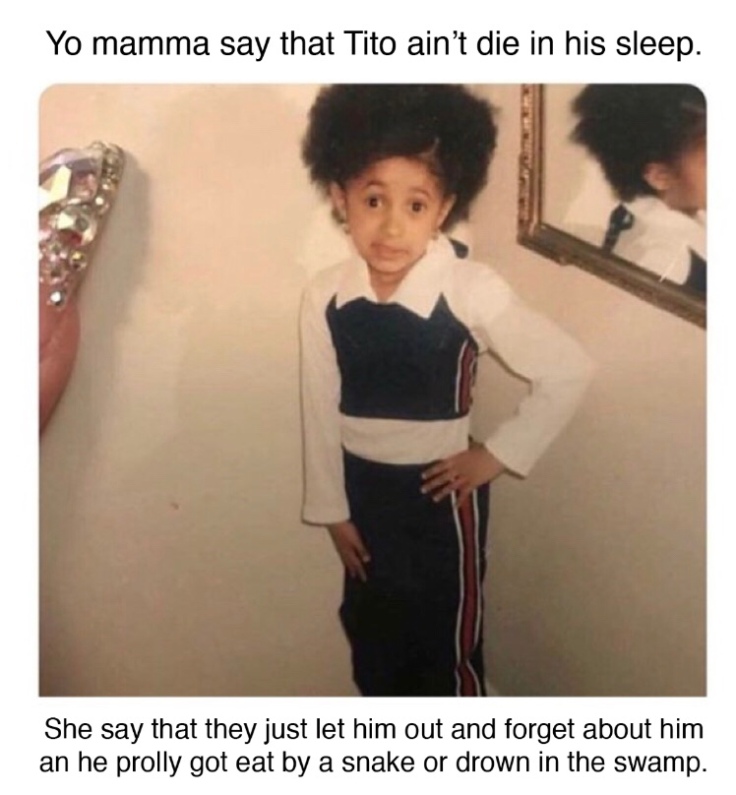 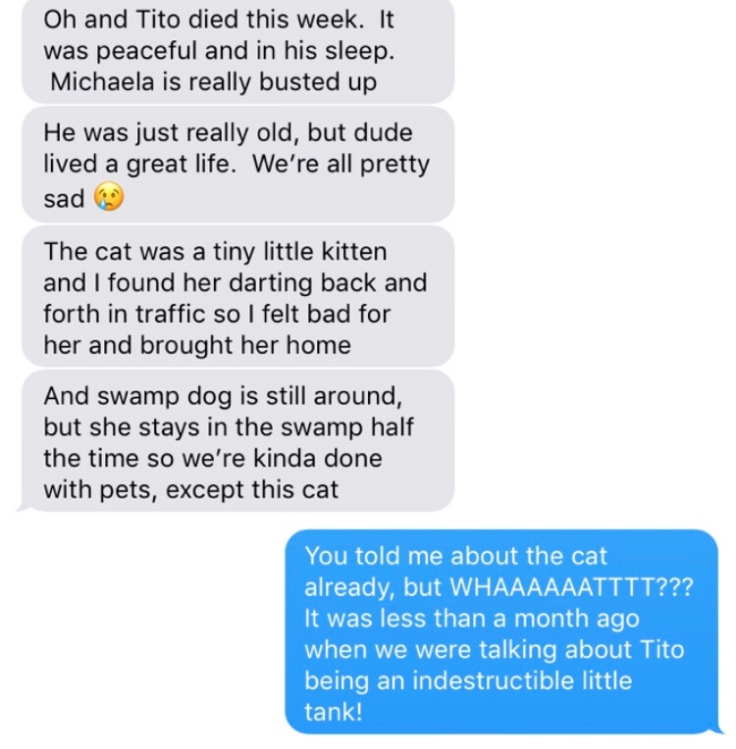 So I must state that I know lying is wrong but I told myself that this time it was okay.  I guess the good Lord had other plans b/c this week I get a text from hubster, “Guess who decided to show up?”  The next text was a pic of our half blind boston terrier with his bent ear.  Tito was a bit skinnier than usual, a little roughed up, but otherwise fine.  Of course I was happy that Tito was back but I was also feeling guilt and stress over the next phone call I would have to make.  I decided to employ the band aid method, do it quick and get it over with.  Thankfully our girl didn’t explode into a rage, she was happy Tito was alive.  She wanted details of his current state of being and assurance that his highness (or in this case his blindness) would be escorted properly on his trips outside.  My girl was happy and Tito was home. 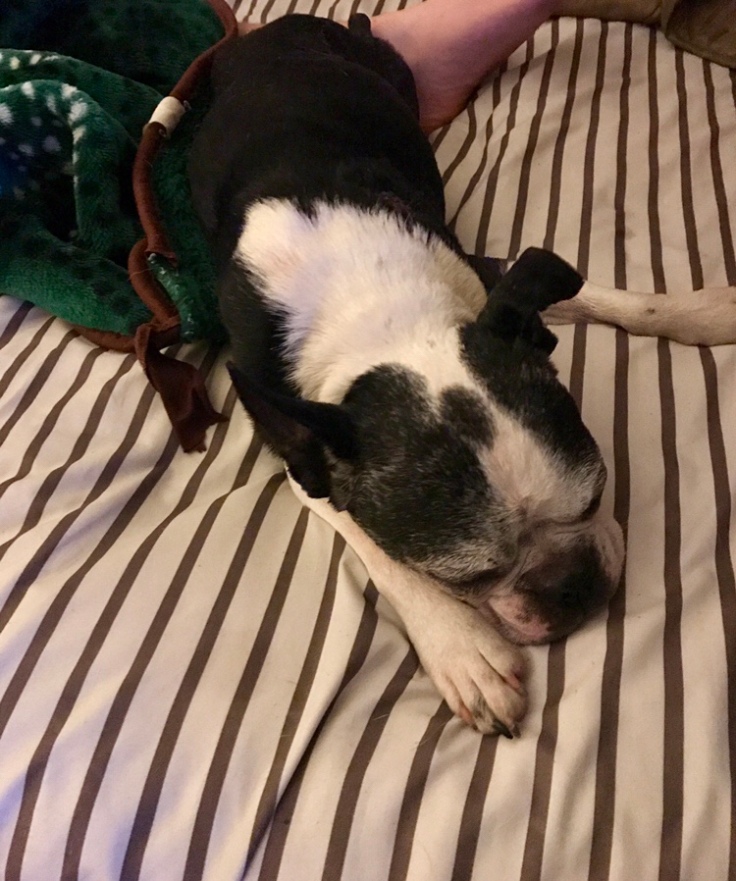 Who knows how many more months or years we have left with “the tank” but I’m happy to have them.  Dogs are God’s way of reminding us that there is good in the world, despite our evil, despite our lies.  I wish we did better by them.  Granted, I didn’t share much in the way of bikes this week but I guess the lesson for me to learn this week is that dishonesty never pays.  My daughter understood why but now trust has been broken and that isn’t easily repaired.  She isn’t angry with us but sometimes we adults tend to overthink it and don’t give our kids credit for being able to handle the hard stuff, it’s a mistake.  Kids are resilient and truth is always the right course of action.  I guess there’s really no such thing as a “sweet little lie.” There is a such thing as tenacious little stubborn dogs. Much like I needed to prove to hubster that I could ride that many miles and still be okay (& I was… sort of) that little stinking dog proved to me he wasn’t down for the count yet. Maybe that’s why I like him, we have a share sense of stubbornness!

Oh and before I forget, to the family and friends that I lied to about the dog, I sincerely apologize.  It came from a good place but it was clearly wrong!

2 thoughts on ““Tell me lies, tell me sweet little lies””