This little 80’s classic was the song that was playing in my head somewhere outside of Scranton NJ one rainy night. My brain is wired like a juke box, or iTunes, just less organized. I have background music playing in my head for almost any situation. This particular song got pulled from the memory because I found myself facing the forth issue on what was supposed to be a problem free motorcycle trip with my gal pals &… I was pretty far from home. The song lyrics were not comforting.

“Who’s gonna come around when you break? You can’t go on thinkin’ nothing’s wrong…” -The Cars

It started out when I left Alabama hauling Pearl in the back of my truck. We were headed to Columbus, Ohio to meet up with friends where I would dump the truck and jump on the bike and head for Babes Ride Out which was being held in Narrowsburg, NY. I was stoked. The trip from Ohio was supposed to be with a group. I arrived at my gal pal’s home and downloaded the bike when her husband asked, “Want me to connect it to the trickle charger?” I declined, issue number one. As everyone started up the engines that morning, I got nada. My hats off to the restraint that friend’s husband showed by refraining from the “I told you so” comments. He did crack a smile, but I had to laugh with him. So jumping her off didn’t work & upon connecting to the trickle charger we realized I needed a new battery. I’ve never been one to hold up a party so I insisted the other ladies set out and I’d catch up, it wouldn’t take that long to pop in a new battery. Once I finally got on the road the weather was great. I was prepared for what Mother Nature wanted to toss my way, but I don’t love being weighted down in rain gear so rain gear stayed in bags. I had an intricate bungee system (color coated) holding luggage securely to my bike, & then the rains came. 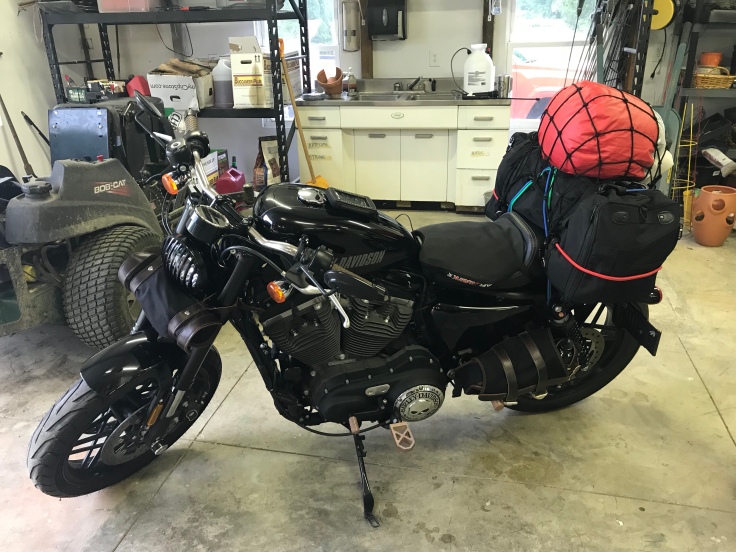 I don’t love riding in rain but we do what we must. It was during the rain storm when I realized my phone wasn’t being charged as it should so I figured I’d wait out some of the storm and take a look at what was up with this phone charger. I plugged phone into a rest stop vending machine outlet while I inspected my bike in the rain. For all you military folk, I did the PMCS before I took off but issues of the day warranted another look. The rain acted as a very good distraction as I performed my maintenance checks b/c I’d like to believe had it not been for the rain I might’ve identified issue number three, maybe. I left the rest stop with a little charge and still no solution to what was wrong with the charger connected to my bike. This problem was vexing me but it was no biggie, I’d trudge on and charge the phone at every gas stop. I realized that this would severely delay my trip and there was no catching up to the group but we had taken off early and it’s not an adventure without some unknown variables along the way. First gas stop I pump gas and go in store to stretch my legs and grab drink. As I walk back to my bike, coconut water in hand, I see problem number three. My bottom exhaust pipe has vibrated loose and has been dragging the ground for a while (use RED lock tite on a Harley). So I was faced with a choice give up or push on. I’m not gonna lie, I was a little nauseated at the sight of that pipe, but when you grow up the way I did you develop a knack for rigging things together, mechanically inclined or not. I had a tool bag, I rigged it up and on I went. Oh and I had a little help from a veteran biker named Dave… 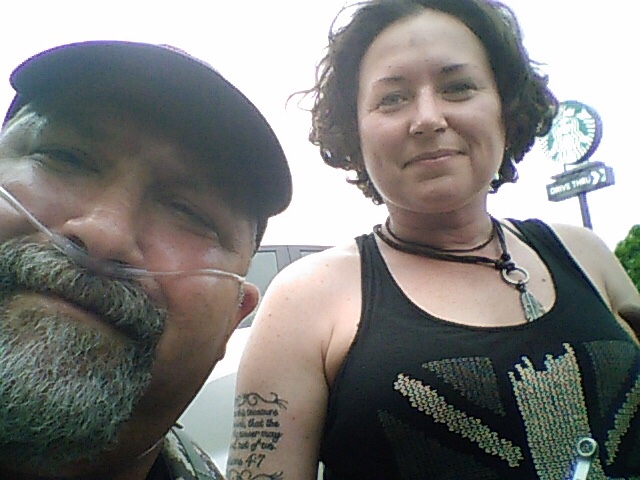 As I trudged along and continued thinking about phone charger issue and having short convos with the hubster back home, we realized in attempting to jump my battery I had blown a fuse. Relief! Okay, I didn’t figure it out on my own & I didn’t have fuses, but just knowing what it was made me feel better. I had a paper map in a dry bag so that would have to suffice. It was getting dark at this point and the next stop is where I identified issue number 4. Somewhere outside of Scranton I stopped at a Valero station. I’m not real familiar with NJ but this was not a densely populated area, the Valero station was the only light that wasn’t moon or stars. When I went in to pay there was a crowd of older men laughing & socializing. They greeted me and not in a creepy way. They jokingly said, “Your group stopped by here a few hours ago.” They didn’t know it really was my group. Anyway, I grabbed another coconut water and walked out to my bike to find that the other exhaust pipe had now come off the header. UGH! The collar holding it on was thankfully still there but I had no nuts to reattach it to the bolts. Enter Steve… 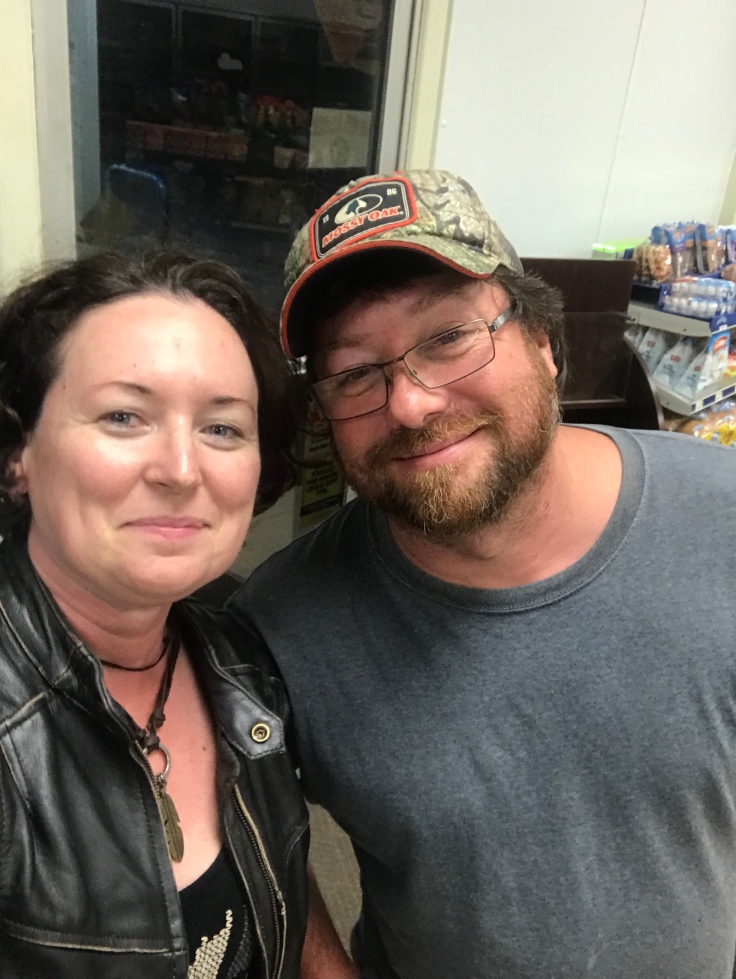 Steve walked out and saw my dilemma and proclaimed, “My shop is like 5 miles from here, if you follow me back we’ll find something to fit that bolt.” I politely declined Steve’s offer being that I was a woman, alone, in the middle of nowhere. I would not be following Steve back to his shop, I’ve watched enough Law & Order SVU. Steve must’ve read my expression and realized this as well and told me to hang on and he’d go grab stuff and bring it back. Steve truly was a nice guy who just wanted to help and he did. I owe Steve a beer or a pay it forward next time I see someone in need. I finally was back on the road and reunited with my gal pals just in time to get a decent night’s rest. 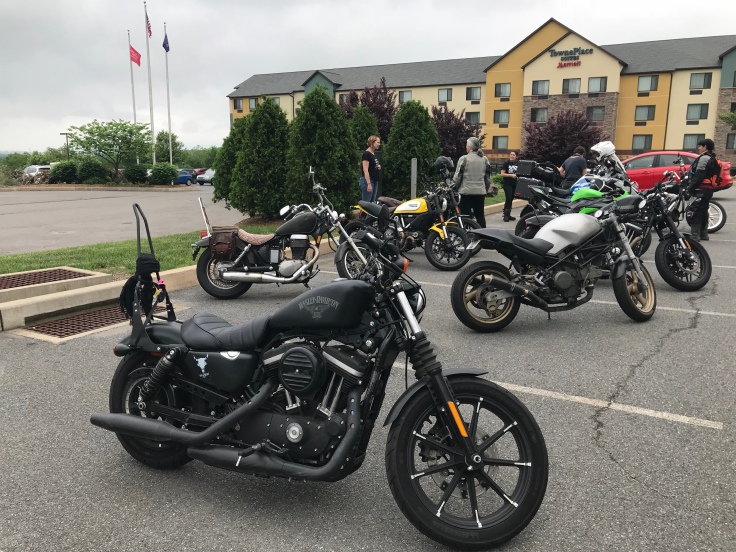 The next morning at the hotel one of the other moto chicks had fuses. A Ducati rider with the handle RedRaven, she was awesome in her ride preparation. I had a phone again! No more reading maps like a cave woman! The rest of the weekend held more adventure, but I’ll save it for another time. Be like Dave, Steve, and RedRaven. The world could use more Daves, Steves, and Ravens. 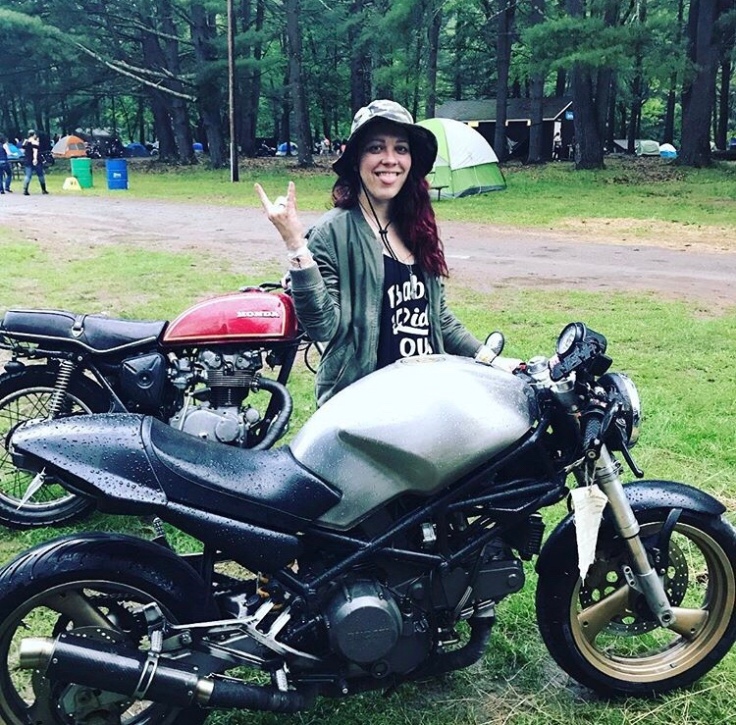 Turns out I didn’t need someone to “drive me home” but it was cool to be encouraged to get back on the road with confidence. Technology is great but it was nice to test my old map reading skills & to disconnect for a while. In the process, I found that there are still bright spots, friendly people, & that my brain radio works when my iTunes fails. Cue Poison… 🎶 Don’t need nothin’ but a good time🎶

One thought on ““Who’s Gonna Drive you Home…””